Private investigator Lily White has a client with a faulty moral compass. When the client is arrested for murdering his wife and her alleged lover, Lily follows her intuition and her own leads. If she's wrong, she'll at least know she did her job.

police detective Derrick Paxton remembers Lily from another case. He understands she suffers from PTSD and thinks her judgment is impaired. He goes after her client and the evidence he needs to close the case. When Lily is kidnapped, the case takes an unexpected turn.

In a sometimes racially divided city, a black cop and a white PI work together to peel back every layer to find the truth. What they find leads them to each other, but do they have enough to bring the true criminals to justice?

If you ask someone the worst thing their partner could do to them, most of them would probably say "cheating."

Lily White opens the story by stating she once had a different name, a different life. She recalls a time when she was hired by Jimmy Heyl as a private investigator. He wanted her to catch his wife, Roseann, cheating.

Lily views Roseann with co-worker Thomas Kennedy and notices Roseann has a stalker. Lily reports this to Jimmy and he informs her to forget about the stalker and focus on his wife's infidelity.


Soon after, Lily witnesses Rosann's murder. Lily calls the authorities and Detective Derrick Paxton arrives at the murder scene. This is not their first meeting. Sadly, the psychological and emotional concept of murder is something Lily has dealt with before.

The crime scene investigators are called into work on pinpointing things on Lily’s surveillance video like; the type of bullet, killer’s stance, and facial recognition. They have a suspect and shortly after this, they learn of another murder and there's a connection between the two.

After Lily's kidnap, she focuses on the kidnapper and double homicide. Meanwhile, detective Paxton is reminded that it takes constant retraining to do good detective work. Together, they are challenged to solve these murders.


This book was a quick read and it has an intriguing set up that keeps one guessing. The references to Detroit and the adjacent coastal area were an added bonus. With its personable protagonists and a slew of seedy characters, this mystery will appeal to a wide spectrum of readers. 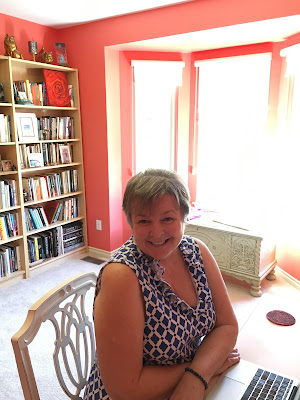 Cynthia Harrison writes contemporary women’s novels and crime fiction published by The Wild Rose Press in print and e-book.
Her latest crime fiction novel Lily White in Detroit will be released later this month.
Cindy, welcome to Lori's Book Loft and thank you so much for joining us here on the blog!

Cindy, you have written fantasy, romance, and women's fiction. What lured you to write this mystery?
They say to write what you love to read. I love these mysteries featuring strong but flawed female characters. I wanted to see if I could write one.

Are there any characters that came more naturally to you than others?
Lily came very easily. I'd been promising her a book since she was a minor character, a 17-year-old runaway in another book. (Blue Heaven). Then she came back on a rampage in Love and Death in . She was so damaged but brave. She wanted to take over both books but I kept saying "One day you'll get your book." And she came to me with all her baggage and plopped down in my imagination and said: "So how are you going to fix me?"


What part of the story is the hardest for you to write?
I am not a violent person, so all that proved to be pretty tough going. I actually took a break mid-book to write a fun cozy mystery (Blue Mystery). But I was determined to tell Lily's story and picked it up again as soon as I finished the holiday book.

How do you know when the book is complete?
This is one of the most fun parts of writing a book for me because I don't ever know. Until I write the last sentence and then it dawns on me. Oh, it's done. I love that feeling of recognition. It surprises me every time.

If you had to describe your writing style what words would you use?
Natural. Organic.  I don't strive to find a voice. I never think "Oh I need a description here" or "a love scene now." I never use a thesaurus to find the right word. I do sometimes think about the right word, in revision, but in the first draft, even if I know the word isn't right, I use a placeholder until the right word shows up.


What are you doing when you’re not writing?
Usually reading.  I love spending time with family and friends, too. I do yoga because I sit so much. I take a line dance class with friends, too.
Do you have any particular practices that help you write?
Yes, somewhere near the start of the novel I'll do a large poster collage. I go to the bookstore and buy a bunch of magazines and just pull visuals I fall in love with that might or might not work in my story. I try to use models, not movie stars, for my characters. Then while I'm working I have it propped up in my office. I look at it when I need new inspiration. Then about halfway through, I read what I have and do an outline of the rest of the story.

Do you use the names of family and friends when you write characters?
Sometimes I do. Lily White had a different last name in the other books, but I wanted her to have a fresh start in Detroit, so I gave her the last name of one of my friends who had recently changed her last name to White. So White at first for me wasn't some big thought out thing pointing to racial themes. I only realized the deeper significance a few weeks later. (Duh.) In this book, I also used the first name, Thomas of my friend Tom. I asked him first.

Who is your favorite author?
In the mystery genre, I love Lee Child. There's something about Reacher.

Is there anything you'd like to tell readers?
The best advice I ever got was to write a book you want to read.

Cindy has also self-published two indie paranormal novels, a novelette featuring the love story of a minor character from The Paris Notebook and a non-fiction writing manual she used when teaching college freshman creative writing, now in a second e-book edition available on Amazon. Cindy has been blogging on http://www.cynthiaharrison.com since 2002 and is currently posting flash fiction. Cindy is married to super-husband Al.  They have two grown sons and three grandchildren. Cindy and Al live in Michigan and Florida. No entertainment is so cheap as reading, nor any pleasure so lasting. Mary Wortley Montagu