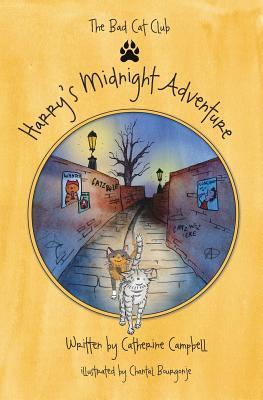 Synopsis: It's . Do you know where your cat is?

Harry spends every night curled up asleep on Jessica's bed. Until the night he's put out for being naughty and discovers his quiet neighbourhood is a terrifying place after sundown. There's an angry dog on the loose and the Crooked Lane Cats roam the streets led by the fearsome One-Eyed Pud.

Can Harry the scaredy-cat make it through the night and find his way back to Jessica? Or will the toughest cat in the neighbourhood eat him for dinner?

Luckily, he has help from his new friends, the mischievous cats of the Bad Cat Club.

If you love animal stories and funny cats you'll love the debut book in the Bad Cat Club series. The perfect children's book for reading aloud or reading alone.

A while back, I posted a page devoted to Cat Reads and mentioned that before I became a dog owner, I was owned by cats. So, it might be no surprise to you that I was excited when Catherine Campbell contacted me and asked if I read the first in the Bad Cat Club series.

This is a suspenseful and humorous chapter book series and a quick and easy read.

We learn that territorial and social animals, like cats, often deal with peer pressure and bullying.

I love that Harry was an inside cat until Aunt Tilda plonked him down outside. Once outside, he meets with others cats who show him the ropes.

While he misses the affection, friendship and comfort of being with his favorite human Jessica, Harry’s decisions, once outside, are often met with cats influencers who guide him in negotiating his instincts.

I laughed through much of the book and especially liked it when Harry came upon the dog who thought Harry was there to steal his bone causing the cats to scramble up the tree.

One scene leads to another, and soon Harry meets a cat who has a reputation for meanness and is the leader of a gang. All of this leads to a silly food fight and to me wanting to read other adventures of The Bad Cat Club.

I received a copy of this book through the generosity of the author for an honest review.
at September 18, 2018