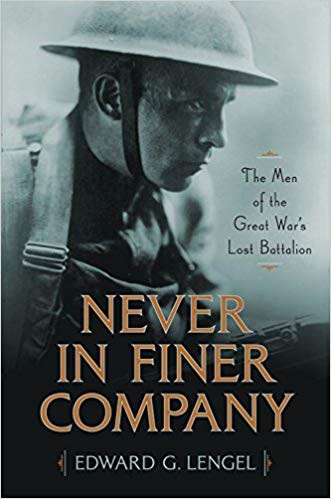 It was one of the most heroic events in American military history. Here is the larger-than-life story of World War I's "Lost Battalion" and the men who survived the ordeal, triumphed in battle, and fought the demons that lingered.

In the first week of October 1918, six hundred men attacked into 's forbidding . Against all odds, they surged through enemy lines--alone. They were soon surrounded and besieged. As they ran out of ammunition, water, and food, the doughboys withstood constant bombardment and relentless enemy assaults. Seven days later, only 194 soldiers from the original unit walked out of the forest. The stand of the US Army's "Lost Battalion" remains an unprecedented display of heroism under fire.

Never in Finer Company tells the stories of four men whose lives were forever changed by the ordeal: Major Charles Whittlesey, a lawyer dedicated to serving his men at any cost; Captain George McMurtry, a New York stockbroker who becomes a tower of strength under fire; Corporal Alvin York, a country farmer whose famous exploits help rescue his beleaguered comrades; and Damon Runyon, an intrepid newspaperman who interviews the survivors and weaves their experiences into the American epic. Emerging from the patriotic frenzy that sent young men "over there," each of these four men trod a unique path to the October days that engulfed them--and continued to haunt them as they struggled to find peace.

Uplifting and compelling, Never in Finer Company is a deeply moving and dramatic story on an epic scale.

This is the story of 4 men whose lives were intertwined through extraordinary circumstances.

Lengel begins this tale along the waterfront, in 1916.

Can you imagine living then?

These were years when everyone watched baseball and boxing. The years where masses of people crowded silent movies, Vaudeville and, .

Now, imagine being awakened after to the irritatingly strong smell of smoke.

When a fire occurred along the pier opposite the Statue of Liberty it gradually moved to create a succession of explosions along . Sabotage was considered, and it wasn’t till several years later the possibility of an act of terrorism was recognized.

Fusing this backdrop with its historical context WWI is gripping. The United States entered declaring war on Germany on April 16, 1917.  On April 28th Congress passed the Selective Service Act to raise a national army for service in World War I and enacted it May 18th,  soon after men were eligible to be drafted with Sept 4th hailed as National Draft Day.

The Lost Battalion consisted of several different companies from the 77th Division who were recruited, draftees. During their mission Maj. Charles Whittlesey and Captain George McMurtry of the 308th led nearly 600 men into the uneven terrain at Charlevaux Ravine in the of  . While this battalion was able to push forward, allied soldiers on either side of them had failed and Germans encircled them.

We learn that leaders touted resilience and aggressiveness. And while many felt the burden of loss, some did not have experience with combat that teaches the closer you are to the frontline the more exhausted you become.

Through this evocative writing, we see The Lost Battalion dug funk holes that got deeper every day. The soldiers defended their position for five days and nights facing a multitude of challenges including the friendly fire which ceased when a homing pigeon, Cher Ami, delivered a message, to stop.

In the midst of all this uncertainty, soldiers ran out of food and relied on rainwater collected in helmets. If they were fortunate, masks kept out noxious gas and the stench of rotting corpses.  Survivors grew to anticipate death, when cries, whispers, and groans, faded.

The perseverance and grit really stood out in this novel. Though wounded Captain George McMurtry and Maj. Charles Whittlesey tried to keep the troops optimistic.

Sergeant Alvin York was able to intervene and led an attack on German machine gun nest, killing enemy soldiers, and capturing 132 men.  Sergeant York became one of the most decorated United States Army soldiers of World War I. His actions assisted Major Charles Whittlesey and Captain George McMurtry in leading the remaining 194 survivors of The Lost Battalion out of the ravine at Meuse-Argonne.
William Randolph Hearst sent War Correspondent Damon Runyon to  where Runyon spent time mixing with the troops of regiment 77th. He made the lucid Doughboy Diaries which still stirs our emotions.


Both evocative and atmospheric, this story ensnared me from the very first page.  Award-winning historian Edward G, Lengel brilliantly weaves together the hardships of The Meuse-Argonne Offensive which was the Deadliest battle in American History. He points out that The Lost Battalion is made up of men from diverse cultures who become comrades in the trenches - indicating one is Never In Finer Company.

A copy of this book was provided to me by the generosity of Da Capo Press Marketing Manager Quinn Fariel for my honest review.