The Gift Of The QUOXXEL by Richard Titus 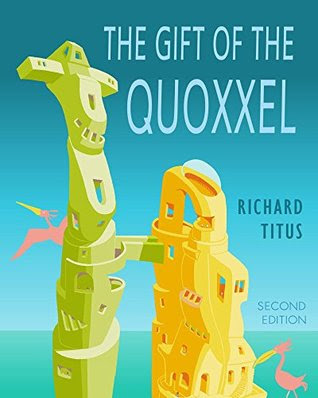 The Gift Of The QUOXXEL

What would you do if you were the monarch of a perfect,
tropical paradise without a care in the world?
Well, King Norr would like to leave, and always has.
"Where else but Nibb?" was the island's favorite adage.
Venturing beyond Nibb was only inviting misery
and "haddocks."

Telling too much here will ruin the surprises in store,
but some of the mysteries include --

Who was the mysterious girl who would not speak?
Had Doctor Hinkus fallen prey to marauding drumbkins?
Whose prank set the Palace afloat?
What's a spudcake?
Do pirates bathe?
Did Uncle Fenwad roll out of the Palace?
What's a Sober Tooth Tiger?
Do Nibbian pigs have a future in aviation?

It's a mixed genre escapade ready to transport
armchair adventurers of all ages.

Join King Norr, Queen Vayla, Bink, Captain Gadd,
Doctor Hinkus, and Yill the talking reptile in this
whimsical, light-hearted tale that will keep you
guessing until the last page

I appreciate the quoted passage from Robert Louis Stevenson which sets readers up for what's to come which is a brilliant and humorous story filled with imagination and wanderlust.

Readers are soon introduced to King Norr who is eager to leave the island and thus begins a calculated treasure hunt.

Illustrations close out the chapters, and included, is a glossary of Nibbian word script.

This zany book made me laugh and it still makes me smile.


Richard Titus is multi-talented. You can see the cool graphics quote he made from my review here.
at October 10, 2018

Email ThisBlogThis!Share to TwitterShare to FacebookShare to Pinterest
Labels: by Richard Titus, The Gift Of The QUOXXEL