The Legacy Letters
his wife, his children,
his final gift
Carew Papritz

The Legacy Letters reveals to us the rediscovered private letters from a dying father to his children—and his wife.  His words of wisdom, interwoven between deeply personal stories and poignantly-told memories, ultimately become the practical, moral, and spiritual guidebook for his children he’d never live to see, and for his wife, his redemptive act of love. The Legacy Letters has won 5 national awards, including the Mom’s Choice Award.

There is something achingly personable about opening The Legacy Letters to the page titled Early Evening.  It's really difficult to explain. At first, my eye was drawn to the page and then I found my hand gently caressing it

I often think of sunset as a tranquil time and in this book, it's an appropriate time for an intimate ceremony of final rest.

I've reread December 23rd multiple times and my heart aches when I come to the words, dying far away from his family and friends.

This man who is dying chose to give these letters to his wife and the children that he would never live to know.

These precious letters contain much value!

These words faithfully guide us and speak to the essence of a life lived with small things in natural beauty.

In a  book about the size of a hand, Carew Papritz brilliantly makes us aware of the silent nature of this message which is a simplification to a gratifying, soulful life. And while I loved the warnings about the compromises of adulthood, and the morse code of semi-finished thoughts, I  think my favorite passage was there is no fear in dying just the fear of not loving and living deeply enough.

The Legacy Letters was gifted from the author.

The Legacy Letters, I treasure. 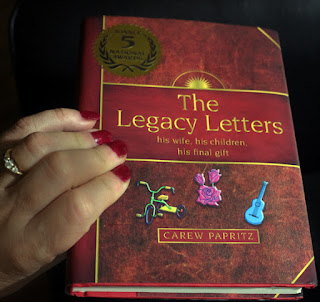 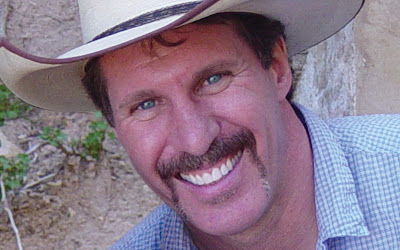 Carew Papritz, also known as The Cowboy Philosopher, is the author of the multi-award winning book The Legacy Letters. Though fictional, The Legacy Letters has won acclaim as a life lessons book for all generations, gaining the distinction of being the only book in publishing history to win awards in both fiction and non-fiction categories. A Renaissance Man in an age that lauds the specialist, The Huffington Post says Papritz "intrigues and enlightens, charms and catalyzes change for every reader."

As part of his many innovative and adventurous first-ever book signings, Carew truly lives his book’s central message to “live life to the fullest” while signing books on top of volcanoes and horses. These events and other YouTube videos, such as the “I Love to Read” series and his annual literacy-driven charity event, “The Great Book Balloon Launch,” inspire kids and adults to rediscover the joy of reading! Proceeds of the summer’s sales of The Legacy Letters went to the Make-a-Wish Foundation.  Proceeds from his recent “First-Ever Book Signing while Stomping Grapes” went to the Seattle Children’s Hospital.  Other charities include Reading is Fundamental and the Military Mama’s Network.