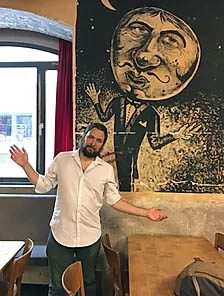 
Erik, can you speak to the importance of reflection and self-expression in your poetry?

It varies for me depending on the project. every time you die and my forthcoming book in which I keep myself hostage, are deeply personal, but they also never directly confront the personal events that they seemingly emerged from. It’s almost as if personal moments and memories spark the poems and then the poems take themselves elsewhere, traveling down language and image, until the feeling of the memory is still there, but not the specifics. My work tends to be described as surreal or experimental, which is to say that I think reflection and self-reflection come through as impressions, as if they are the fingerprints of memory, rather than full examinations of moments or events.

Tell us some words you frequently use to describe your poems?

I just asked my partner, and the first three words that entered her head were earthy, tactile, and bodily. I would add minimalist, surreal, experimental, and haunted.

Do you have poetic rituals or superstitions?

I often wish I did. I follow the poet C.A. Conrad on Twitter, and am always envious of their relationship to crystals and other objects— the way these items speak to them, in one instance, after being buried, and tell them their stories. They have a lot of intricate and interesting somatic poetry rituals that can be found on the web.

My ritual is that I loop the same song, often wordless, over and over while writing a piece. The melody often pulls me through the writing, so I’ll change up the song if I want to alter mood, sound, aura. If I’m really stuck while writing, I will turn on music with words, as well as the TV—usually a song by Patrick Wolf and episode of Buffy the Vampire Slayer, things I am very familiar with. It’s almost like I need to flood myself with sound.

I watched a documentary on the great James Baldwin years ago and apparently he used to write a lot during big, loud parties. He needed that kind of energy to produce his work. Writers are more often shown in solitude by the media, and I think we have too much romanticized the lonely writer barricaded in a room. That might work for some people, and that’s great— I know people who write some amazing things that way— but one size does not fit all. I wrote a lot of the poems for many of my books in public spaces, with many people. You just have to find what works for you.

Did anyone tell you to pursue something else?

In my senior year of high school, I applied to Sarah Lawrence College, hoping to become a writer. My father was not pleased with my choice, hoping instead that I would learn a trade and become, like him, a union worker. What I have learned from continued living, is that my hands, my body, are not as strong as his, at least, not in the same way. When my partner and I moved into our first house, I tried scraping a shut window in order to get it to slide open, and I ended up putting my hand right through one of the glass panes. I break more than I repair. Every once in a while, I get lucky. My hands seem much more comfortable at the keyboard.

My father passed away in April of my senior year. He did not know I ended up going to Sarah Lawrence. My first year there, I wrote mostly poems about his death. I don’t remember them being very good, but they helped me process. Many years later, I wrote every time you die, which is a meditation on death, partly his, partly everyones—perhaps even mine, in anticipation. I think about what my father would have thought about my trade as a physical object that he could hold, just like the deck he build outside for us, it was firm, of the world, stable—like him, like us all. I think, after all, he would approve.

Why is Microfiction appealing?

I like things bite-sized— the bit of sound that rattles in the ear and can’t escape (for me, the rhythm of Tori Amos’ “Little Earthquakes” or Kate Bush’s “Running Up That Hill”)— the line from a poem or a short story that strikes you so hard, you will always remember it (like the final stanza of Sylvia Plath’s Lady Lazarus: “Out of the ash/ I rise with my red hair/ And I eat men like air”).

I tend to prefer individual songs over their respective albums, episodes of television shows, even particular individual scenes, over the entire arc of the show, etc. Unlike many English majors in college and graduate school, I did not like reading large Victorian Tomes. I always preferred poetry— something digestible, something that could be turned over and over again within the space of hours. That said, I did and do love reading novels—normally the more lyrical and formally playful ones (Virginia Woolf, James Joyce, Toni Morrison, Jackie Kay).

In microfiction, the narrative, the lyrical, and the spare, all coexist. The word limit for microfiction depends on who you ask, but Best Microfictions defines it as 400 words or less. The familiar adage for poetry is the same for microfiction, every word counts. So while there is most always a narrative frame, there is a lot of pressure put on language choice, which often leads to a lyricalness. Experts in this form include Lydia Davis, who is often more straightforward, and Cathy Ulrich, whose work often has wonderful, haunting hints of the strange.

Are contests a constructive way to gauge the quality of writing?

I think many lovely writers get recognized by way of contests, but that the contest culture often leaves a lot of vibrant, interesting voices out. The same with end of the year top 10 lists— read enough of them and you’ll probably notice that a lot of the same people, and the same publishers, show up on each one. Don’t get me wrong, I normally enjoy the books on these lists, and those that win contests, it’s just that there are thousands of incredible books that don’t receive this recognition and fly under the radar each year. Contents and lists usually leave out books from small presses. That’s why it’s so important that small press authors support each other and create a community in which each other can be recognized and heard.

Why do you feel some poets believe rhyming is boring?

The majority of rap music rhymes and I’d be surprised if anyone would call rap boring. I think some rhyming can feel unnatural to the modern ear if the words appear to be forced into a rhyme for the sake of rhyme. Contemporary poetry is quite expansive in its possibilities. Poetry can range from the quietly crafted lyrics of Mary Oliver to the visual soundscapes of Douglass Kearney, and rhyming is one of the many possible tools one can use. I think as long as the choice of rhyme is intentional, it will be less likely to come off as unnatural or boring to a reader. This, of course, is true for any poetic technique.

Can you tell us why you request students to express a change they want to see in the world?

I really appreciate this question, because the reason is quite important to me. I often feel like the classroom is experienced as a sealed environment by students—that assignments can seem perfunctory rather than functional to them. Even if writing instructors talk to students about audience, I have found it often registers to students as another task rather than as a way to express themselves as individuals in the world.

I want students to grow as writers but also as social actors in the world— to see their writing not only as a thing in itself, but a thing that can have an external impact—no matter how local, no matter how small. They have complete freedom to decide what the change they want to see in the world is, as well as to decide what audience, they want to reach, or critique, as well as why, through their project. So that they can be as explorative in their expression as possible, I let them convey the change they want to see through any media (speech, poster, artwork, performative dance, etc) as long as it is accompanied by a written piece that explains the logic behind their choice of expression, as well as intended audience and expected impact on this audience.

Since there are a lot of moving parts to this project, I split the project up into a series of small assignments, and offer students individual guidance throughout. I have little involvement in their topic of choice other than to suggest what may or may not be feasible within the semester.

Do you feel social media has helped or hindered students to be comfortable having uncomfortable conversations?

I think social media can be a really powerful communication tool. During Superstorm Sandy in New York, I saw it be used as a tool for social good. I am seeing similar things now with different facets of the response to Covid-19. I don’t know if these posts always lead to direct change or action, but they do lead to important conversations, that might have powerful, albeit indirect effects. Social media may provide those who feel less comfortable speaking in a public sphere, for many diverse reasons, a voice. I think it all depends on how it is used, which is why I think social media literacy is important to teach in all levels of education, in all types of classes, especially since much of the interactions students are having with each other and the world the days are online.

I have a copy of Erik's book Every Time You Die. It's a full-length exploration of death and loss that features poetic erasure as both a theme and concrete practice. The book was a quick read.  It is full of creative and enlightening energy. I found many of the poems to be intriguing and especially enjoyed hunger years.  The book also has many unique free-flowing images by Dutch artist Marcel Herms.
Erik Fuhrer